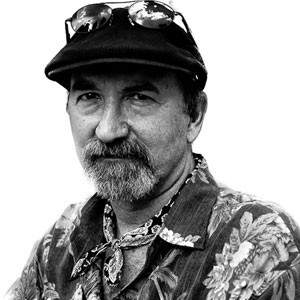 "As a result of my second fellowship, I am more content, physically healthier, and freer as an artist. I used this time and opportunity to discover and take care of myself in the most intimate and vital ways necessary for a healthy and creative life."

John originally planned to travel to Japan to take a traditional woodblock technique workshop, but the program was cancelled. He decided to stay in the U.S. and attend workshops on meditation and nutritional education, an ongoing area of interest and focus for John. He studied at the Loomis Institute in Madison, Wisc., and also attended workshops in New York and Chicago. He studied nutrition with Dr. Howard Loomis and meditation with the late Thomas Ashley Ferrand, a teacher whose books John had previously read.

The second meditation workshop was in New York with Achter Ahsen, John’s teacher and guide for the last 23 years. The renewal experience resulted in the creation of five new paintings. More important to John, however, was his pursuit and study of meditation. “Why do I pursue meditation? Meditation is a vehicle for self-discovery and a deeper union with the life of which we are all a part. My job as an artist is to follow this learning and expression in order to share the beauty and harmony of life.”