The Arts Council was pleased to partner with Kroger Co. on the creation of three murals and on the purchase of one sculpture for new stores in the greater Indianapolis area.  Three stores opened in the fall of 2016; one store opened in August 2017.

The Kroger family of stores is honored to use the talents of local artists to create an uplifting experience in their stores. The company aspires to create a safe store environment that conveys a sense of connectedness to the communities within which they operate. The objective of Kroger’s commissioned art program is to create a space that encourages community gathering and celebrates the spirit of the neighborhood. As a company, Kroger values honesty, diversity, inclusion, integrity, respect and safety.  These values are expressed by the artwork commissioned for each store. 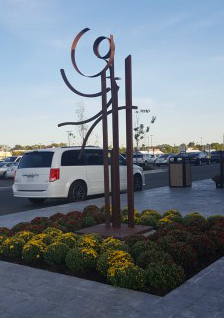 Kroger purchased Flight (2013), by Indianapolis artist Bernard (Bernie) Carreño, for its new Marketplace location in Franklin, IN. Carreño typically uses simple forms and industrial materials to express abstract concepts in three dimensions. Flight was inspired by watching birds swoop and dive; viewers have expressed feelings of hope and grace upon seeing the sculpture.

For its Fishers Marketplace location, Kroger commissioned a mural from Indianapolis-based artist William Denton Ray. Ray combines shaped and colored pieces of wood to form a dynamic impression of the vibrancy of the Fishers community. A coloring sheet will be provided to Kroger to young customers so they can create their own version of Ray's design.

Indianapolis-based artist collaborative Big Car was commissioned by Kroger to create a mural for the new Marketplace location in Greenwood, IN. Big Car's project  involved the Greenwood marching band community in its creation and painting. 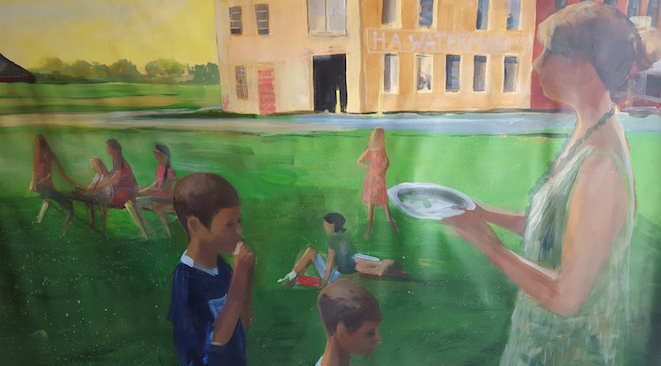 For the new Franklin Township location, Kroger commissioned a large acrylic on canvas painting from Indianapolis artist Kyle Ragsdale. Ragsdale based his composition on his memories of his first experiences with the area 25 years ago, visiting friends less than a mile from the store's location.

All four new artworks were commissioned based upon an open call for qualifications and interest, identification of finalists, and a proposal process for which the finalists were compensated.