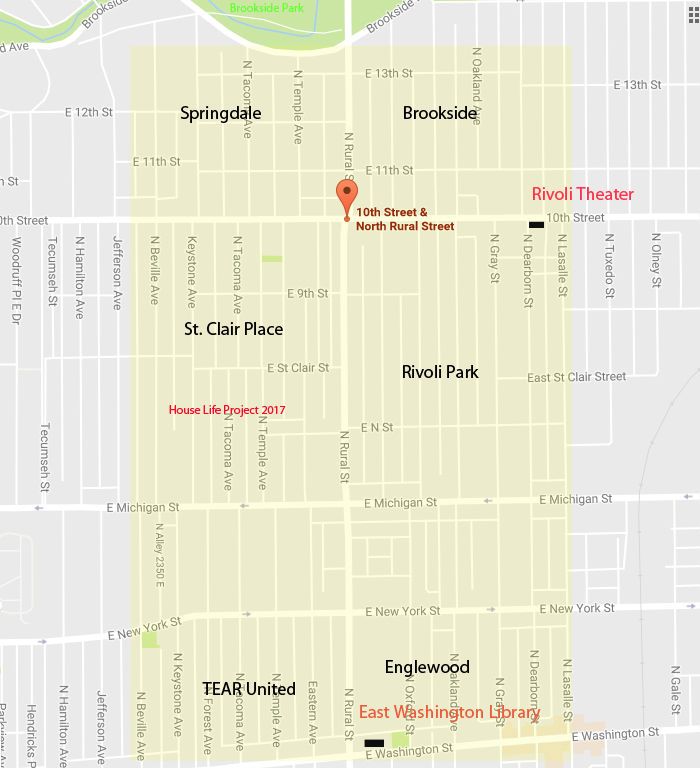 What happens when you train a group of artists, community members, and police officers to work together to improve public safety in a neighborhood?  That’s what we’re finding out with Indy East Art Peace, a joint project of the Arts Council of Indianapolis and Near East Area Renewal (NEAR) that will took place from January 2018 through July 2019. The Indy East Art Peace Toolkit is publicly available, here. 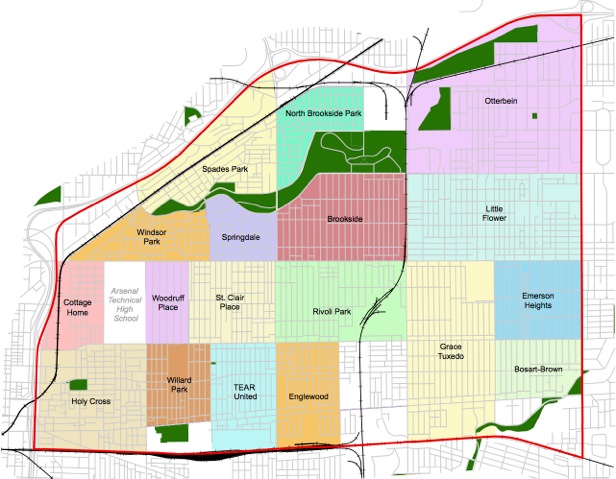 Until the 1980s, Indianapolis’ Near Eastside was home to middle-class families with good-paying manufacturing jobs.  With the decline of this economic sector over the next 25 years, the area faced dwindling community investment, resulting in its current high levels of unemployment, poverty, crime, and physical deterioration.

In 2012, the community developed the Near Eastside Quality of Life Plan to help guide its future; in 2015, the federal government designated the Indy East Promise Zone as an area with assets and activity that merited special attention from programs designed to improve livability and spur growth.  Creative placemaking was identified in both of these plans as a desired approach, to help bring “out of the box” thinking to seemingly entrenched challenges, particularly the type of crime that was keeping the neighborhood from attracting opportunities for jobs and economic growth.  This approach is confirmed by a significant body of research. 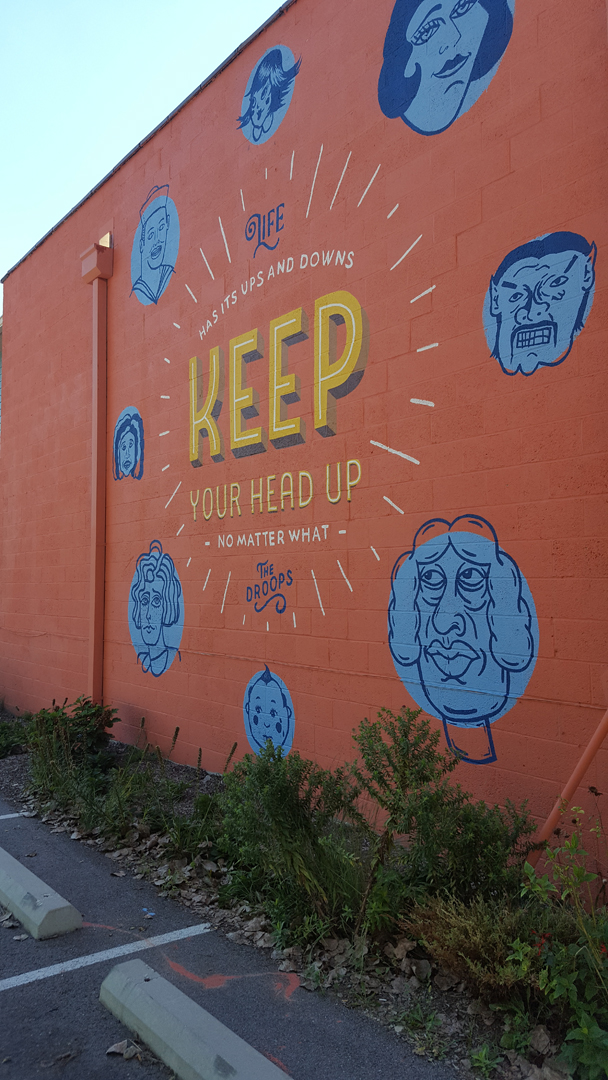 Meanwhile, the East District of the IMPD has a new emphasis on the idea of “community policing,” in which the community and law enforcement partner to create a positive physical and social environment that prioritizes problem-solving for prevention rather than reactive arrests.   A set of strategies often applied in community policing is Crime Prevention through Environmental Design (CPTED), which employs techniques focused on art, architectural and urban design, and the social environment to make a neighborhood more crime-resistant. Many East District officers are CPTED-certified.  Other techniques highlight working positively with youth at risk and those re-entering the community after having been incarcerated.

Indy East Art Peace was created by NEAR and the Arts Council, with support from the City of Indianapolis and the participation of the IMPD, the Marion County Prosecutor’s Office, and the Indy Public Safety Foundation, to combine these community- and city-based efforts with the creative energy of artists, well known for their ability to inspire activity that brings community together, promotes positive use of public space, and looks at challenges in a completely unexpected way.  The project intends to take advantage of these three different streams of expertise, and adds training, planning time, and, most importantly, compensation, to create knowledgeable, empowered, and productive teams.  As the project progresses, teams will develop ideas for action and will vet them with the community at large during a “pitch night” event, where the preferred ideas will be identified for execution.  Along with the project ideas, Indy East Art Peace will develop evaluation metrics and a process toolkit so the effects of future actions can be tracked and the techniques of Indy East Art Peace can inspire other neighborhoods.

The Rural Street corridor, between Brookside Avenue and E. Washington Street, was chosen as the Art Peace project area because it has been identified as an area of high crime for the East District by IMPD; it is also the focus of current efforts by NEAR in the areas of economic development and housing.  Six neighborhoods come together here in very different ways to solve common challenges; infusing this interaction with artistic energy for a positive result is the goal of Indy East Art Peace. 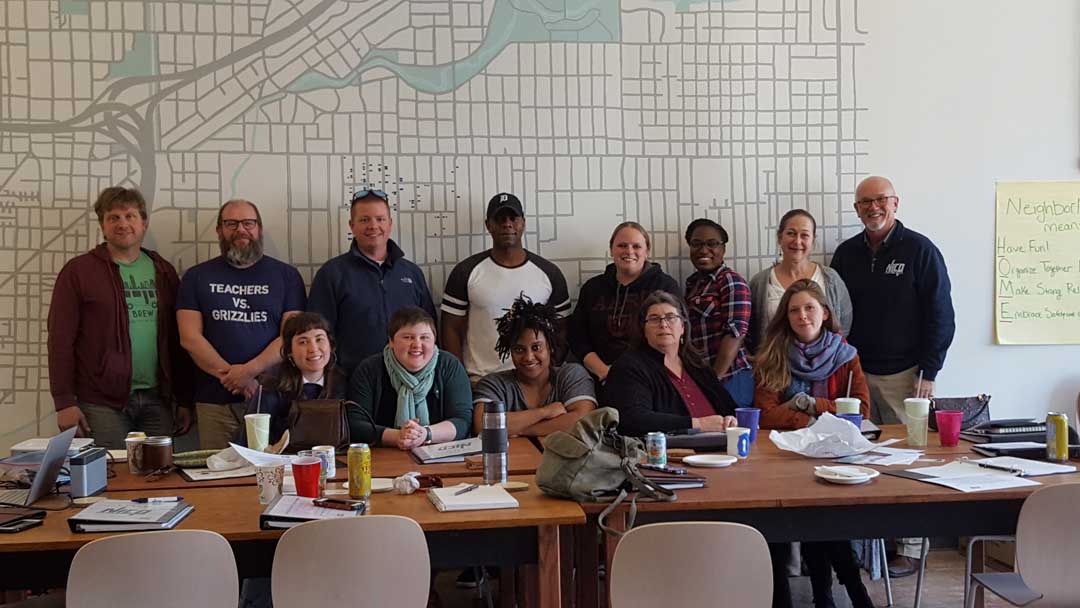 In January 2018 a team of arts experts, neighborhood representatives, and Indianapolis Metropolitan Police Department (IMPD), Arts Council, NEAR, and Indy East Promise Zone staff selected the Indy East Art Peace creative cohort, who applied for the roles through three separate open calls. Both new and longtime residents and artists using a wide range of artistic approaches are included in the group. 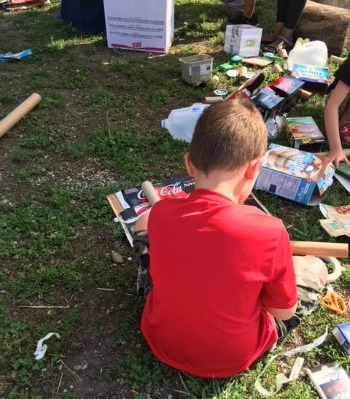 The participants are continuing to meet monthly as a group, talking with each other and with community guests about how best to address the crime prevention needs of the community.  They are also working individually and in small, mixed-discipline groups to survey the project area and generate ideas for engaging the community as a whole through the arts. Community engagement activities undertaken since June included a pop-up “maker” playground for preschoolers and early childhood learners, printmaking workshops engaging youth ages 6-18 to help visualize peace, a Community Art Exchange pop-up, open mic nights, a community conversation, and a story workshop for young adults about what it means to commit peace.

Pitch Night:  February 5, 2019
Based on their work and community conversations, the Art Peace participants presented eight project ideas to the Near Eastside Neighborhood Summit on Tuesday, February 5, 2019.  Summit attendees listened to quick pitches, then circulated among project tables to learn more and “vote” with tickets to indicate their interest in each project.  Project ideas included a series of interactive murals, neighborhood gateway installations, an annual Neighborhood Art Night, the “IMPD Cares Peace Mobile,” an outdoor theater/park, a community writing center, and a “sidewalk art” project called You Are Here.  The projects are designed to use art’s ability to spark conversation, connect neighbors to each other, build neighborhood identity and place attachment, and enhance crucial social and emotional skills that have been shown through studies to help prevent crime.

Pitch Night at the Near Eastside Neighborhood Summit on Tuesday, February 5, 2019 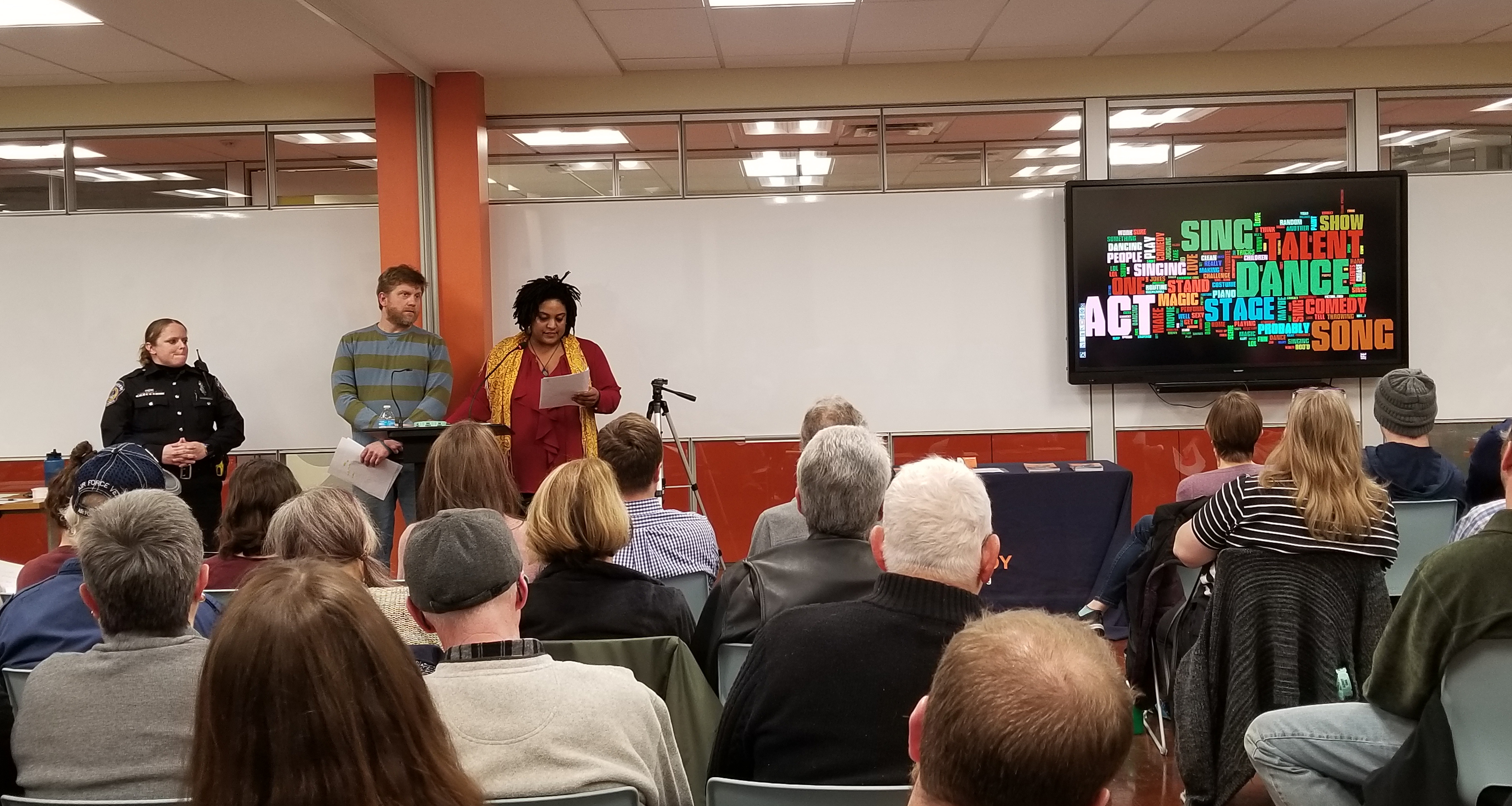 Teams pitch ideas at the Near Eastside Neighborhood Summit 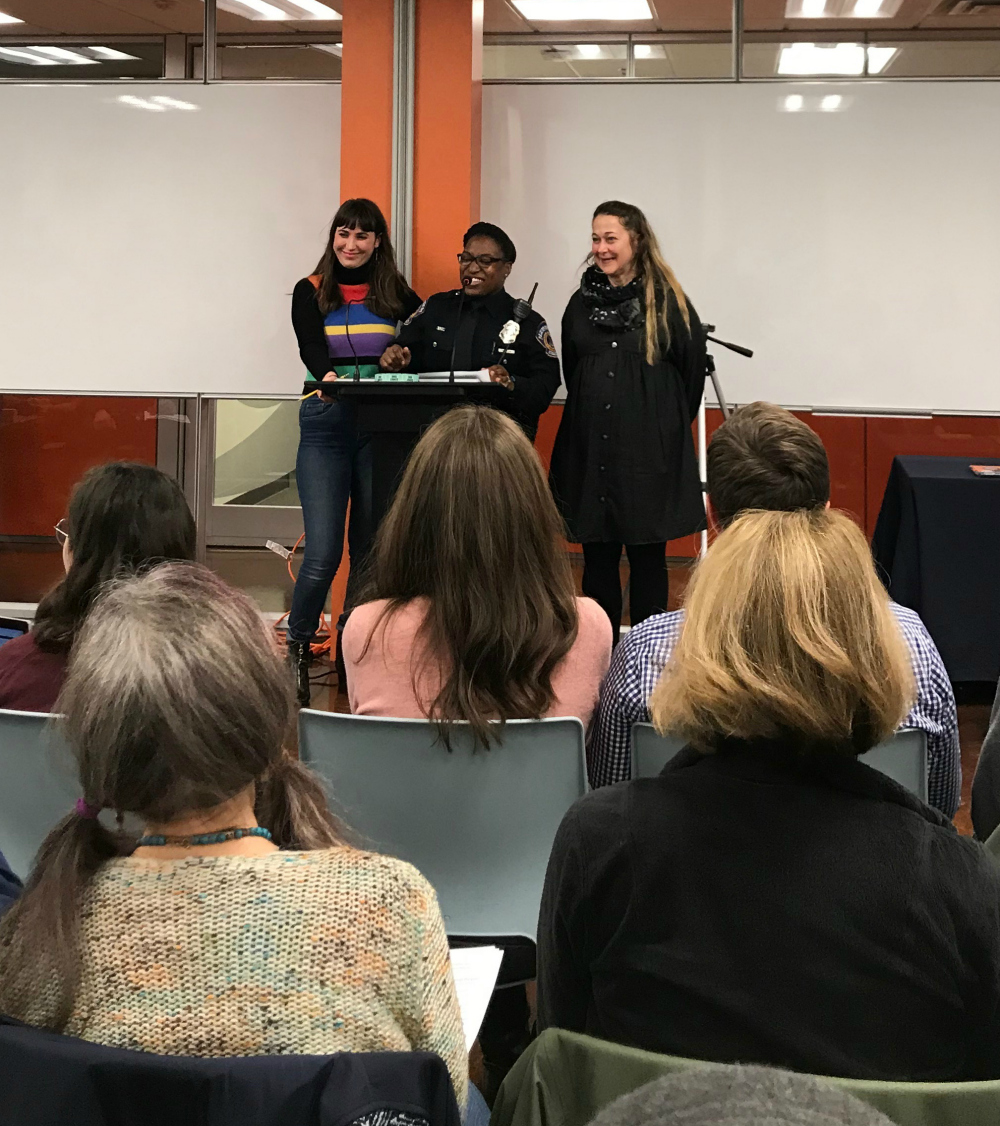 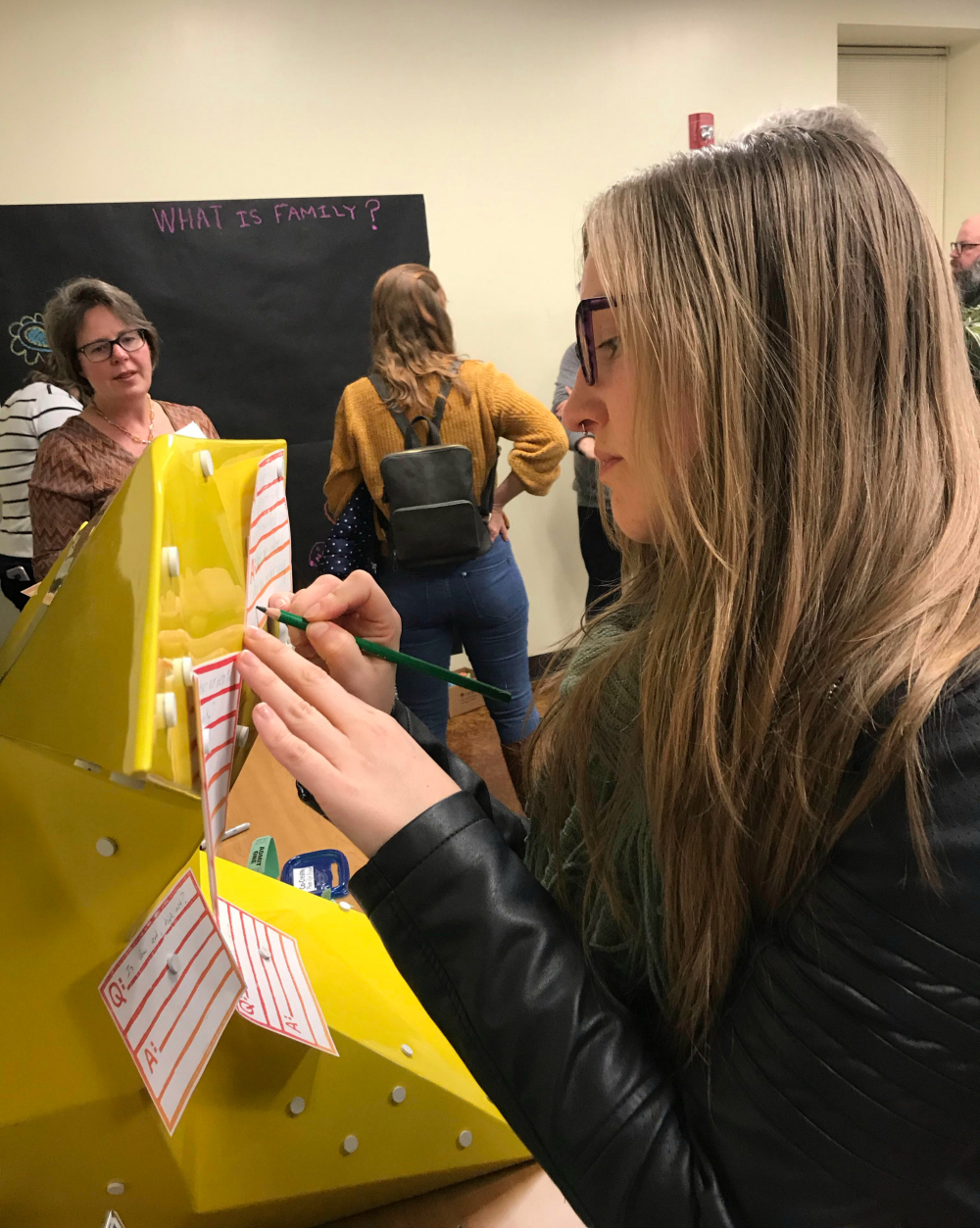 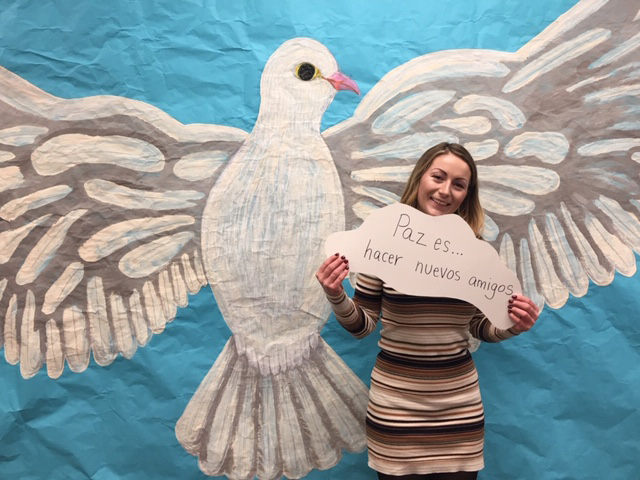 "You Are Here" table
Art Peace participants are continuing to reach out to the community in various forums to refine the ideas. Look for them at neighborhood gatherings and events, at spaces around the community, or chat with them if you see them on the streets. 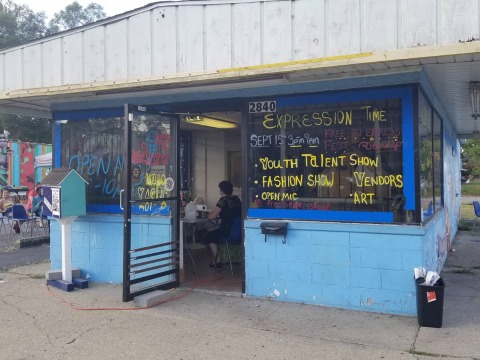 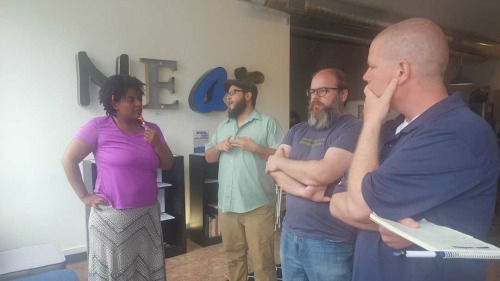 Sam Buffington from Springboard for the Arts (2nd from left) discusses strategies with Star Adita, Mark Latta, and Christopher Shaw at the May 12 workshop. 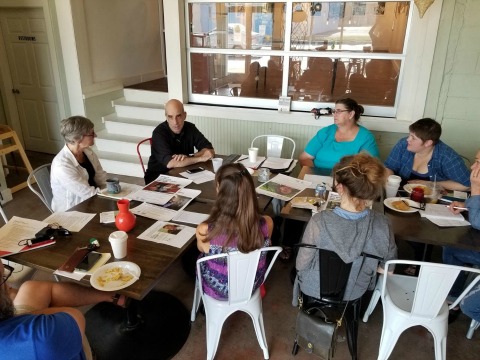 For more information, email This email address is being protected from spambots. You need JavaScript enabled to view it. or call (317) 631-3301 x240.