When Indianapolis was tapped to host Super Bowl XLVI in 2012, the arts and culture community jumped into action, providing more arts activities, projects, and events for residents and Super Bowl guests than any other host city had done to date.

In addition to developing a “Super Choices” campaign to highlight everything that was happening, the Arts Council developed its own ambitious project: to commission 46 new public murals and place them throughout Marion County in time for the big game. Partnering with the City of Indianapolis and raising additional funds from private and foundation sources, the Arts Council saw the half-million-dollar initiative as a way to kick off a new phase of public art awareness and appreciation.

A national call was sent out to solicit interested artists; meanwhile, a local call went out asking for suggestions for high-profile mural locations. From an initial pool of nearly 100 artists, a group of 34 artists of local, regional, and national reputation were selected and assigned to develop murals for specific sites. More than half the artists were from Indiana. Several artists created more than one mural. Mural locations included the walls of schools, downtown and neighborhood businesses, community organizations, civic infrastructure like highway and rail bridge underpasses, underutilized alleys, and, memorably, underneath every bridge along the Central Canal between 10th St. and Ohio St. By not restricting the murals to areas tourists would see, the Arts Council sent a clear message that public art is for everybody.

The Arts Council, artists, and communities worked together to obtain the required permissions and design and paint the murals. Beyond just the huge scope of the project, a wide variety of styles, themes, and imagery contributed to the excitement. The contribution of 46 for XLVI to the entire Super Bowl experience did not go unnoticed: the New York Times devoted a half-page of coverage to the project, and local editorials and event surveys touted it as a breakthrough in event hosting. The city’s public art program, which had languished for several years, had been successfully revitalized.

Many of the murals have since become city icons, including Pamela Bliss’ portrait mural of counterculture writer and Indianapolis native son Kurt Vonnegut, Jr. along Mass Ave and her Indiana Avenue Jazz Masters multi-portrait mural at 33 North Capitol Ave, Hector Duarte’s Quetzalcoatl Returns to Look in the Mirror on the Central Canal at West Street, Eduardo Mendieta’s Dimensional Shadows on Mass Ave, and Carl Leck’s Trivergence at 10th and Mass, which inspired further development of a major neighborhood gateway to the Near Eastside.

The impact of 46 for XLVI on the city cannot be understated. The locations selected meant that a number of blighted areas were improved, catalyzing much-needed economic development in neighborhoods and previously-ignored downtown districts. The appetite of neighborhoods for public art was kindled, and every neighborhood development plan produced since 2012 has included strategies to provide public art, creative placemaking, and arts-based entrepreneurship and youth programs as vital to residents’ quality of life. Public art also now figures prominently in major city planning efforts, such as the Bicentennial Plan 2020, the downtown Velocity Plan, collective impact projects like Reconnecting to our Waterways and Great Places 2020, and innovation districts like 16 Tech. 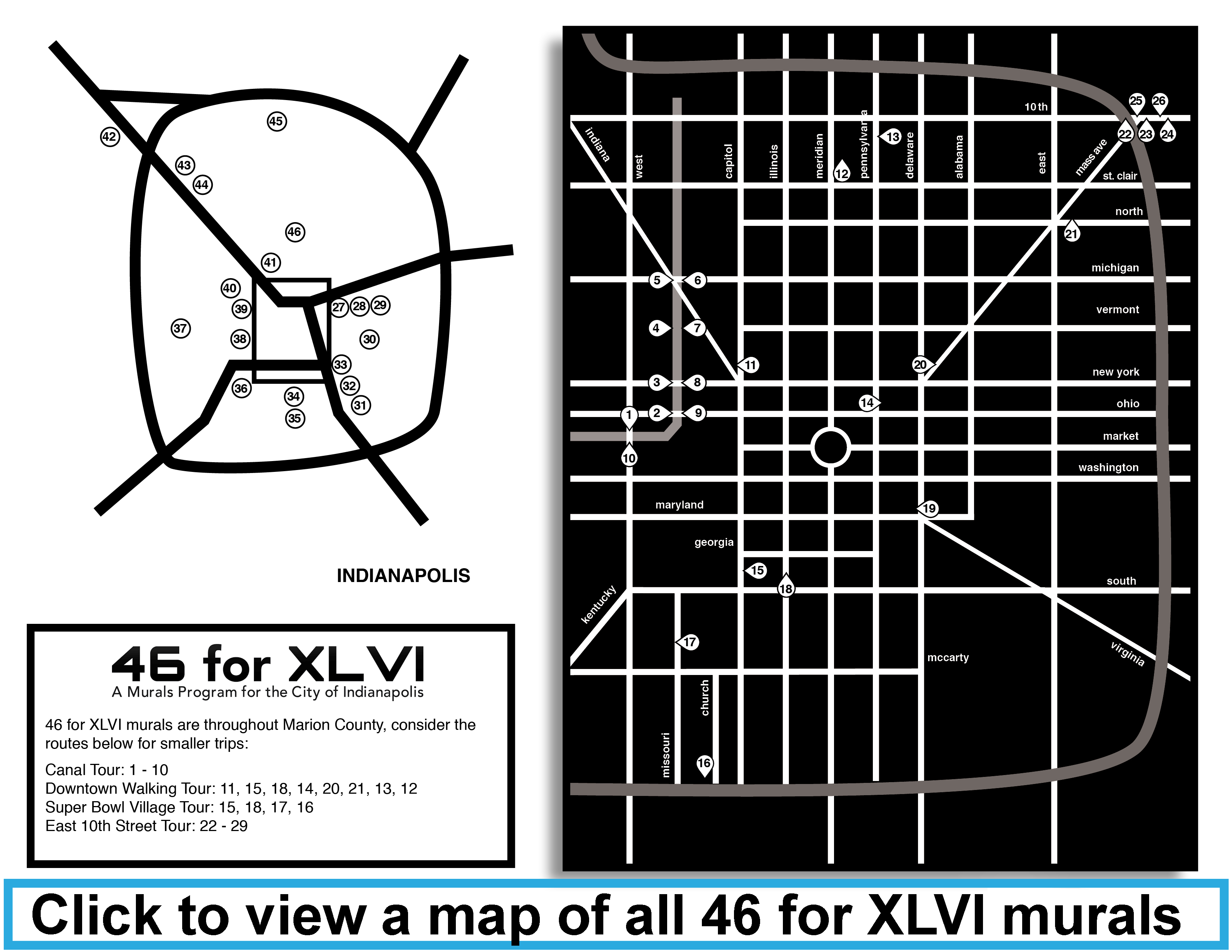